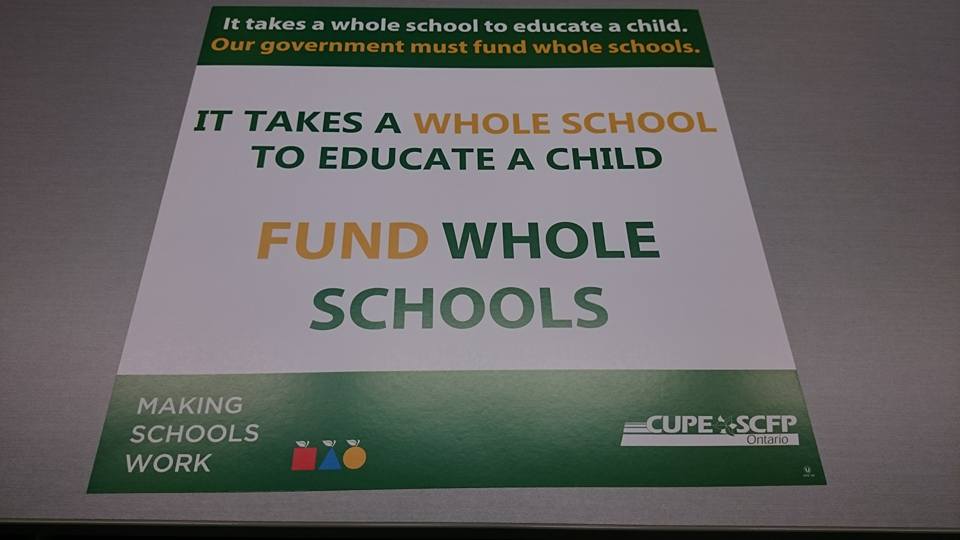 What is it going to take before the powers that be listen to what we have been saying for at least the past three years and do what is necessary to make our education system what it needs to be for our children?

“Between 1995-96, when the Harris government was first elected, and 1998-99, the first year of the new education funding formula, the Conservative government cut a total of $1.5 billion from education. In today’s dollars, that amount equals $2.2 billion”.  Although the Liberal government has made some increases to education funding since then, the increased needs in the classroom have well surpassed the funding provided.

“When enrolment, inflation, the cost of new programs and the element of catch-up reflected in education system salaries and benefits are considered, education funding in 2017-2018 is roughly equivalent to the level recommended by the Rozanski Task Force Report on education funding in 2002. While that is a positive sign, it essentially reflects no progress at all in addressing the fundamental funding issues built into the base funding formula introduced for the 1998-99 school year”.

The education funding formula and the ‘Tier System’ used by School Boards to determine which students ‘qualify’ for the support of a Special Ed. Assistant needs a complete overhaul. The reality is that a Special Ed. Assistant will be assigned one student who qualifies for support but then are also assigned 5 or 6 additional students who require support but do not meet the criteria for support. These students may have ADHD, learning disabilities, mental health issues, or simply have not yet developed the ability to control their impulses.

Many of our Special Education Assistants divide their day between multiple classrooms. Every minute of their day is scheduled to be supporting students. Coffee breaks and lunch breaks are often missed because there is not enough E.A. staff to cover for them. In some cases, students with special needs are left on their own for periods of time because there is nobody available to support them.

Quotes on the funding formula were taken from the ETFO document titled ‘ETFO: 7 Recommendations to Fix Ontario’s Education Funding Formula’