Duane Moleni will leave the Sault on April 6. His announcement last night on social media leaves community leaders with a lot to think about. 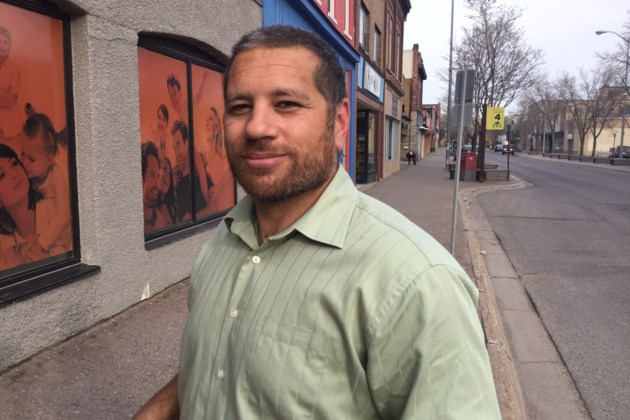 “This city has not proven that it is serious about change. It is in the same spot it was when I arrived here in 2006,” says Duane Moleni, departing manager of the Queenstown BIA. File photo by David Helwig/SooToday.

After nursing the Downtown Association through its difficult rebirth as the Queenstown Business Improvement Area, Duane Moleni has resigned and is moving next month to Red Deer, Alberta.

“I leave on good terms with the board,” Moleni tells SooToday.

“I’m disappointed with my inability to convince the board of the direction that I thought the board needed to go.”

“I haven’t been able to affect the change that I was hoping to.”

It’s been one year since Moleni was hired as manager of what was then known as the Downtown Association.

The following month, the association was thrown into turmoil, as a dissident group of downtown property owners petitioned City Council to disband the association and abolish the annual levy they pay to support it.

Moleni spearheaded a successful counteroffensive, but the turmoil resulted in a major restructuring of the association, with a new identity (Queenstown BIA) and a new board of directors.

So Moleni spent the past year on a transition board that he says has still not articulated a comprehensive vision or plan.

Moleni hails from Paeroa, a 3,900-soul eyeblink of a place in New Zealand best known for things it used to have: a historic horse racing track, a gold refinery and a bottling plant for Lemon & Paeroa brand soda pop.

Since blowing that pop stand, Moleni trained as a physical education, health, drama, and dance teacher, then meandered from South Korea, to the Banff Centre for Performing Arts, to the Sault Community Career Centre and then to the Arts Council of Sault Ste. Marie and District, before joining the Downtown Association last April.

Posting yesterday on his personal Facebook page, Moleni left plenty of advice for our community leaders.

“This city has not proven that it is serious about change,” he said.

“It is in the same spot it was when I arrived here in 2006. Until it is ready to ask the tough questions, and more importantly, ready to hear the harsh realities, and do the tough work that is required to change, this city will continue to lose out to other cities, other communities, because those communities not only provide opportunities, they deliver on what is promised.”

Moleni cited a number of what he says are signs pointing to an ailing city:

“The answer from our leaders is to continue to go back to the same well of ideas from the same group of people – EDC, Innovation Centre, municipal department,” Moleni said.

Moleni said he’s been part of the problem at some times, part of the solution at other times.

“Sault Ste. Marie is a resilient city, and my hope is that is does come out the other side stronger and better, and more learned than before. I wish you well Sault Ste. Marie.”