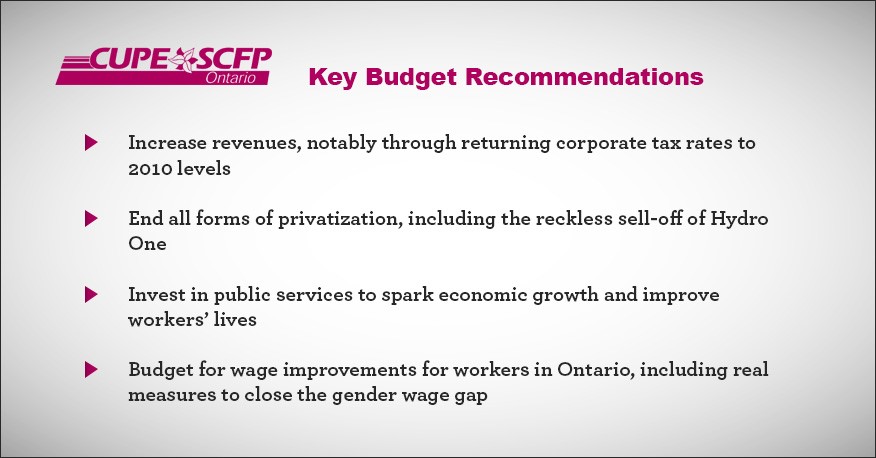 “We’ve seen years of cuts to public services to pay for corporate tax cuts from the Liberal government,” said Hahn. “They’ve given billions to corporations through P3s for projects that would have been cheaper if done by the public sector.

“Despite massive public opposition, they’re selling one of our most valuable public assets, Hydro One, to bolster the stock market’s bottom line.  And for what? It hasn’t helped the many Ontarians who have seen their wages frozen, their purchasing power decline and their jobs become precarious.”

Between 2003 and 2013, average after-tax incomes for workers in Ontario rose by only 0.4%. In some regions of the province, more than 50% of jobs are now considered precarious.  While corporate tax rates are at historic low levels, it is estimated that $700 billion in Canadian corporate returns are not being reinvested in the economy. Recent research indicates not only that corporate tax cuts do not lead to economic gains, but that raising corporate taxes may actually increase investment.

“It’s time the Wynne government’s budget prioritized people, not corporations,” said Hahn.  “It’s pretty clear the corporations aren’t prioritizing us. With the global economy once again in turmoil, the last thing Ontario needs is further austerity measures by this government. Our province is already shamefully spending less, per capita, on public services than any other province, and that hurts our economy.”

As a result of previous Liberal austerity budgets, public sector cuts are impacting communities across Ontario. Hundreds of health care positions have been eliminated, leading to service cuts at community hospitals across the province. Wait lists for services like child care, long-term care and social services are growing, while tuition fees have increased by 360% since 2006. Failure to invest in key areas, like public transit and public school maintenance, is causing issues across Ontario.

“It is time for the government to answer the question: whose side are you on? Are you going to continue to govern for the benefit of corporations, or are you going to govern to benefit the people of the province, our communities, our future?” Hahn asked.

The union’s submission includes detailed recommendations, including ways to generate $14 -15 billion in revenue annually and stimulate economic recovery through investments in the public sector.

“Even with cuts, recent studies have demonstrated Ontario families receive public service benefits worth on average $41,000 a year. It makes sense to restore corporate revenues and invest in public services that grow the economy and deliver real benefits to Ontarians and our communities,” said Hahn.

CUPE is Ontario’s community union, with more than 250,000 members providing quality public services we all rely on, in every part of the province, every day. CUPE Ontario members are proud to work in social services, health care, municipalities, school boards, universities and airlines.