“The kids know if anything happens, Mr. Steve is going to take care of it.” 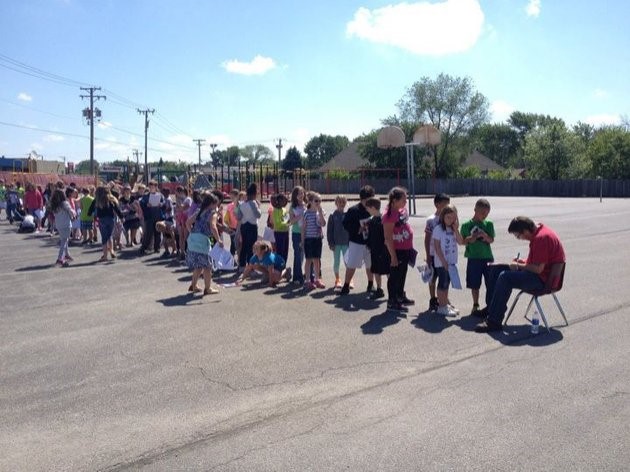 He may not be globally known, but Steve Weidner is the closest thing these children have to a rock star.

Over 100 second-grade students waited patiently for their turn to get the signature from their beloved custodian, who they call “Mr. Steve.”

Bourbonnais Elementary School District #53 posted the photo to their Facebook page, the caption reading that Weidner “reached Rock Star status as he autographs yearbooks for his ‘fans!’”

The photo shows around half of the second-grade students waiting in line to get Weidner’s signature, while the other half had already gotten it before the picture got taken.

“He pays attention to the kids,” Principal Shirley Padera told WGNtv. “He knows who they are.”

“The kids know if anything happens, Mr. Steve is going to take care of it.”

Weidner, who has been a custodian at the school for 15 years, told ABC News that he and the students “get along great.”

“They are really great. We joke around a bunch and they’re able to talk to me and stuff like that.”

On the day the photo was taken, Weidner was spotted by a group of second graders, who then asked for his autograph. As time went on, the group of students anticipating his signature grew and grew.

“You get one, you get all of them,” Weidner told ABC News. “Once they got in a line I sat down.”

A few days after the picture surfaced online, it got posted to Reddit and has now been seen over 3.5 million times.

“I think it’s awesome an employee with no obligation to be a part of these children’s lives has made such an impact [that] they’re willing to wait in line just for his signature,” wrote a Reddit user under the name ‘gagewhite.’

“He goes above and beyond,” Padera told WGNtv. “He’s loved by all the students and the teachers. He’s great!”